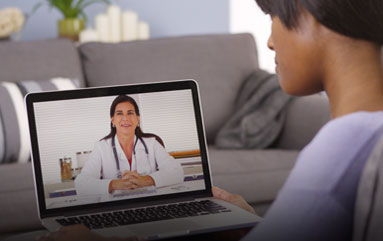 As promised, here’s the second post in a series of program highlights concerning IRHA’s multimodal pursuits in the field of telehealth and telemedicine. As a follow-up post to the last one about the Upper Midwest Telehealth Resource Center (UMTRC), this week, we’ll be taking a look at the Indiana Telehealth Network (ITN), headed up by Ally Orwig.

- Goal: Improve the health and well-being of Indiana residents, particularly those in rural areas, through the utilization of a dedicated broadband health network to deliver telehealth applications including, but not limited to, telemedicine, health information exchange, distance education and training, public health surveillance, emergency preparedness, and trauma system development.

The FCC publishes every few years a report entitled the “Broadband Progress Report” as a fulfillment of their obligation to Section 706 of the Telecommunications Act of 1996. This piece of legislation states “requires the FCC to report annually on whether advanced telecommunications capability ‘is being deployed to all Americans in a reasonable and timely fashion,’ and to take ‘immediate action’ if it is not.” The latest findings (2016) indicate that approximately 39% of rural Americans (23 million people) lack access to 25 Mbps/3 Mbps broadband service, compared to only 4% of their urban counterparts.

These numbers are startling and highlight the paramount importance of programs funded through the FCC Rural Health Care Pilot Program. We can save some of the analysis of how internet access impacts rural providers for the conversation with Ally. For now, I want to talk about some of the other, residual effects of a lack of dependable, affordable, high-speed internet access in rural communities apart from the obvious nature of an increasingly connected, digitized world.

For reference, I’ll talk briefly about a recent policy brief entitled “Broadband’s Contribution to Economic Health in Rural Areas,” published by the Community & Regional Development Institute (Cornell University), based on an analysis of economic literature and empirical studies of broadband access. Considering rural hospital systems are economic hubs for many rural counties, the following graphic is rather telling: 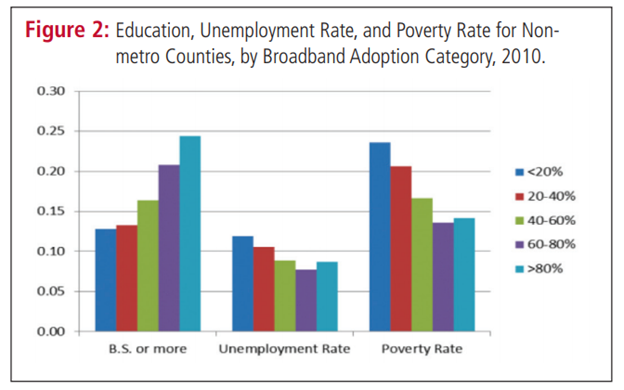 In other words, this study shows that lack of broadband correlates to lower levels of education as well as higher unemployment and poverty rates.

While it is hard to state definitively whether or not broadband adoption leads directly to economic development, the study also shows a dramatic increase in median household income in counties that adopted broadband (greater than 60% of the population had access).

While I could go on about the implications of broadband access and cite study after study, I think it might be just as effective, if not more so, to sit down and hear from someone who is actively working to bridge the “digital divide” in rural communities. I caught up with Ally Orwig to get her thoughts on broadband adoption and how it directly (and indirectly) affects rural healthcare providers.

Q: Who is the primary constituency of the ITN?

A: Any non-profit healthcare provider in Indiana is eligible. The program is geared toward rural providers, but urban providers can participate in our consortium as long as we maintain a 51% rural make up. Currently, we have over 250 sites that have participated in the ITN in some form or fashion.

Q: A recent policy brief that I referenced in this post suggests that, “…government policies dealing with rural broadband may need to have a more explicit focus on actually adopting (and effectively using) the technology. The traditional focus of these programs on simply providing infrastructure may not be enough to encourage true economic growth. Inasmuch as adopting (and using) broadband must be a focus of digital divide policy, future options must consider the means to encourage people to subscribe to broadband services once they are present.” Do you agree?

A: I do agree that adoption is the other side of the broadband coin, especially in rural areas that tend to include an older populace. However, without reasonable—or in some rural areas, ANY—access the matter of adoption becomes secondary. The gap between rural and urban areas in health, education, commerce, etc., directly correlates to access to adequate connection speeds. However, once those connections are in place, they are worthless without a push for use and adoption among the population. While it’s apparent that everything is interconnected, infrastructure is required before adoption can even be discussed.

Q: As a follow-up / concurrent question, what are some of the biggest challenges facing rural communities in terms of broadband adoption?

A: Access, obviously. Cost is a major, major factor, as is education. For older generations, just getting comfortable with technology and learning what is available can be a struggle.

A: I believe that high-speed access is paramount for rural healthcare providers. As the landscape of healthcare changes to include things like Electronic Health Records and Telehealth, fast, reliable connections will be the backbone on which the hospitals and clinics can continue to offer high quality services and remain competitive with their urban counterparts.

Governor Holcomb made an appearance virtually at the IRHA Leadership and Quality event this week to present a special award.

As the public health emergency continues, Indiana hospitals are hopeful they will have more time to pay off federal loans such as the Medicare Accelerated and Advance Payment Program, also known as MAAPP. The repayment due date is August 1 unless it is extended by Congress.

“We are anxious to hear within the next couple of days,” said Cara Veale, the CEO of the Indiana Rural Health Association. “I’m hopeful that the terms of the program have been modified.”